A few years ago, the Autonomous Women’s Centre of Serbia, looking for ways to prevent violence against women, conducted research on attitudes among high school students. What they found surprised them. One in three young people thought that it was ok that a girl was assaulted if she was wearing short skirt or tight shirt. One in four high school boys thought that a slap was not violent; one in ten high school girls agreed. These and other findings confirmed the need for education on violence prevention.

“There’s a huge lack of knowledge when it comes to these issues, and at the same time, youth really need to talk about it,” said Sanja Pavlovic, who, together with Jovana Markulic, coordinates the prevention programme at the centre.

Convinced that students would listen more closely to what their peers had to say, centre staff trained youth educators to lead discussions about violence in relationships with candor and sensitivity. They have led more than 30 workshops with teen girls and boys in high schools in 16 cities and towns across Serbia. As they spoke with hundreds of teens, the idea for a social media campaign took root, one that could reach many more young people, tens of thousands of them.

The campaign, carried out on popular social media platforms like TikTok and Instagram, includes videos, games and quizzes, and a campaign website. These online resources grew out of what teens said they’d like to see, and it is teens themselves who offer the advice in short videos that correct misconceptions with facts.

Their series on rape culture reached some 80,000 youth on Instagram alone. In the comments one youth wrote: “This is horrible! Boys at my school watch pornography without a shame and even aloud with sound. This should be banned from children as they turn into monsters and expect girls to look like that.”

A game about recognising red flags in a relationship – from disrespect and control to blackmail – lets teens test their knowledge in four interactive scenarios. An online quiz asks “Can your behaviour be classified as sexual harassment?” Segments on “The naked truth about nudes” advise on the perils of texting intimate photos and how to respond when someone sends an unwanted photo. The campaign also produces a magazine called True2You and developed a teachers’ guide on preventing and responding to gender-based violence and cyber violence.

“Working with young people showed me that changes are possible – you can influence and prevent violent behaviour,” said Jovana Markulic. She is glad for the chance to “support and empower them in the important process of growing up and understanding what a healthy emotional relationship is.”

She and Pavlovic also worked with organisations in Croatia, Hungary and Spain to develop sister campaigns. Said Pavlovic: “It gives me optimism to know that we are slowly entering into a world where young women are not afraid to speak their mind and to stand up not only for themselves, but for each other.”

The “I Can Say No” campaign has won recognition and best-campaign awards from the NEXUS project of European Universities Cooperation, Sensa Magazine (2020) and Brodoto (2018). A song, “I Can Say No”, composed and performed in 2018 by youth from one of the Belgrade’s music schools, aired on radio and TV stations across the country. 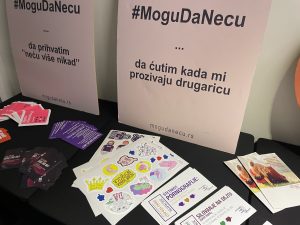 Information and stickers from AWC’s “I Can Say No: Love Is Not Violence” campaign.

Return to grantee stories
Please note that we do not accept unsolicited applications.